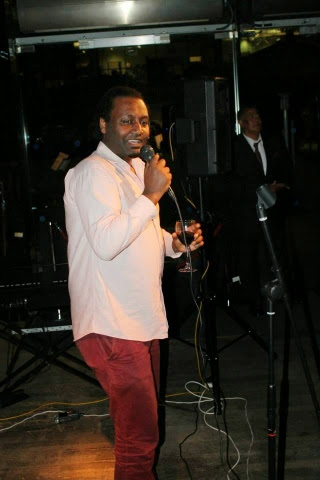 We are really lucky in Norfolk to have such a diversity of talent ranging in ages, origins, abilities, styles andgenres and a lot of it came together on the 11th April to create one perfect storm of awesomeness!! 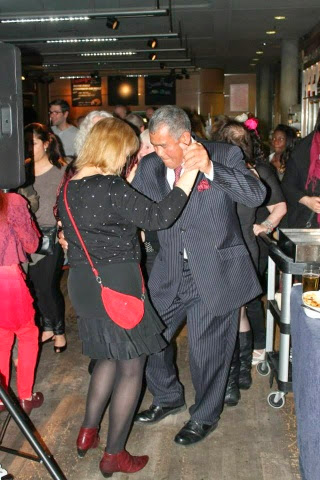 Before the music even kicked off people were getting in the spirit by tucking into Danny Keens amazing food. A true feast was laid out which can only be described as Caribbean with a twist, fusion food at its best with curry, chilli, chicken, pasta, salads and cake. 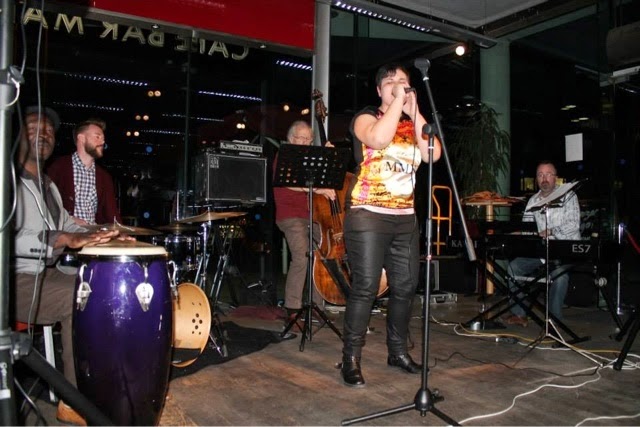 The evening kicked off with brilliant bossa nova star Zara who certainly got the audience in the mood with a couple of easy listening jazz/samba inspired songs. 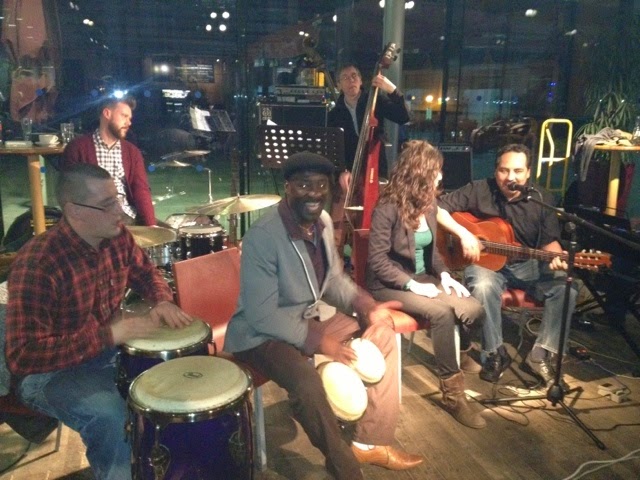 Accompanied by the amazing Cuban percussionist Jose Ferer and his Cubanda band, Simon Brown (recently back from Havana) on piano and all the way from SaoPaolo Brazil, Sambarista Duda and Caspar James on Caribbean calypso. 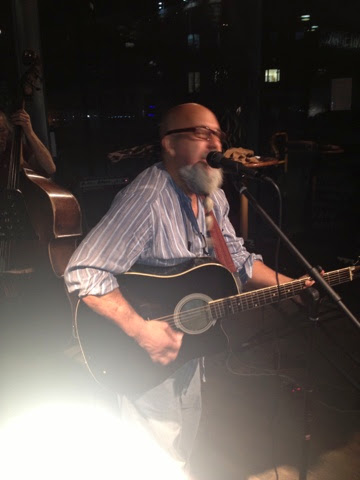 Sahra Gure was next up and with a voice that just stops you in your tracks and makes the hairs on the back of your neck stand to attention,  belting out a few of the jazz standards. 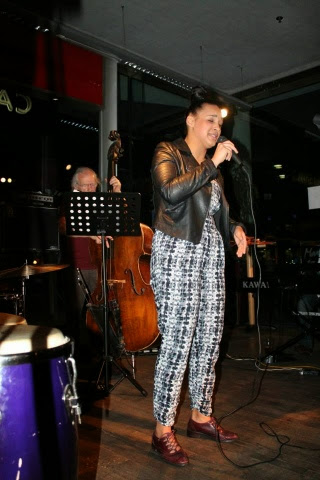 When you hear this girl sing it’s hard to believe that she is still only 17 years old – once to watch in the future for sure.
After a quick pit stop the music started up again with very talented Danny Keen.   Danny is not only a fantastic cook, talented painter but also plays a mean piano. You would have to have a heart of stone and feet of cement not to get toe tapping along to his mambo shuffle. 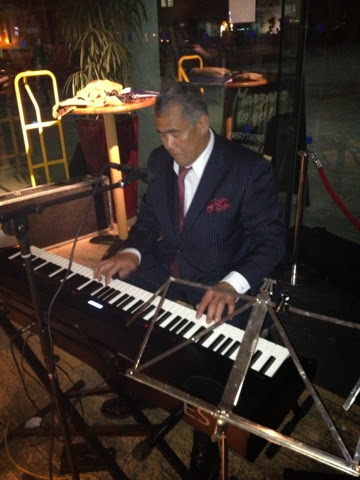 Local talented songstress Ashley – Kate followed with two outstanding jazz performances, firstly with her version of Billy Holidays That Ole Devil which was a lovely romantic version which lulled everyone into a nice cosy love filled haze to be quickly shattered when she then blasted the roof off with Etta James’ I just wannamake love to you! http://youtu.be/woqjYhFrJ5s
The evening ended with Jose Ferer and his Cubandaband, Simon Brown, Sambarista Duda and Caspar James jamming away and winding down the evening.
All good evening was had by all and over £700 was raised to support events and activities for this year’s Black History Month in October. 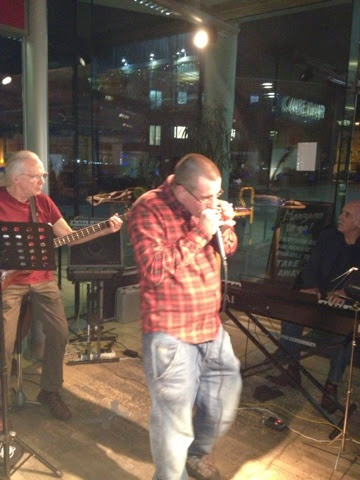 There will be many more night like this over the coming months so keep your eyes peeled for monthly events details. The next gig will be on 23rd May from 7.30pm at Cafe Marzano, The Forum, Norwich. 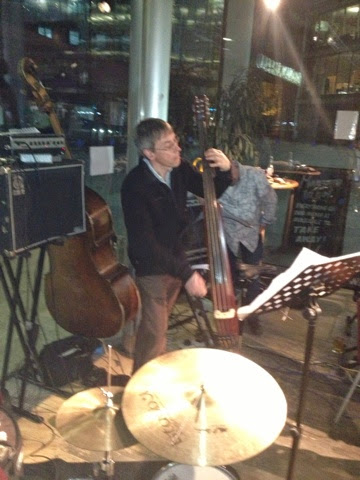 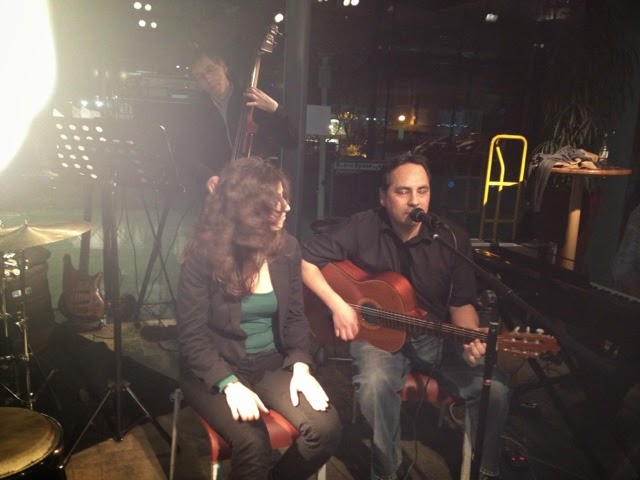 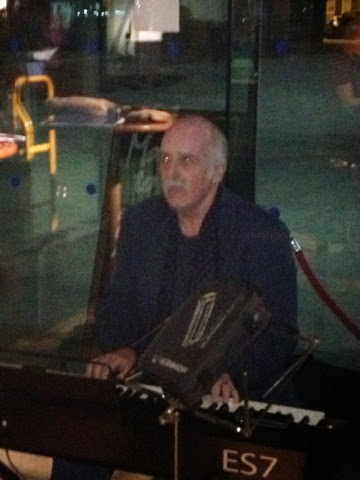 Today we want to bring to you an interesting article written by the NBHM's Literary Events Organiser Claire Hynes and published on The Guardian.


Here you can find the original article:

"I decided fashion adverts need holding to account, after my five-year-old daughter started worrying her skin was too dark"

'It seems a battle must be fought against the powerful and pervasive message that a white western appearance is the way to go.' Photograph: Dan Chung for the Guardian. People associate successful black people with having lighter skin, according to new research. A study from San Francisco State University found that high-flying African Americans were falsely remembered as being several shades lighter than they really are, and it concluded that our memories comply with stereotypical ideas that associate "whiter" skin with favourable characteristics.

If my daughter's experience is anything to go by, perhaps I shouldn't be surprised. My five-year-old could be a poster girl for post-racial Britain. She has honey-coloured skin and Leona Lewis-style corkscrew curls. Strangers stop me in the street to comment on her good looks. But since the age of three she has complained about her appearance. Her hair isn't straight enough. Her skin isn't pale enough. And white characters in books, she tells me, are "better" than characters with black, brown or beige skin.

If my daughter undertook the famous Clark doll experiment, in which children choose between a white and black doll, I'm sure she would, like those studied, name the white one the nicest, while the black doll would be the bad one.

The other day, she showed me an iPad image of a black dress-up doll. I asked her if the doll was nice. "No she's not nice," she said. I asked her why not. "OK, I'll make her a bit more lighter skinned first." She got to work tapping the screen. When she finished, the doll's skin was white. "Here, I made her nice," she said.

Black friends tell me their girls express similar thoughts too, about what constitutes niceness and beauty. Yet we've all given them multiracial books and toys and tell them regularly how gorgeous they are. It seems a battle must be fought against the powerful and pervasive message that a white western appearance is the way to go.

So how are the minds of children – and adults – being influenced, or rather infected? Perhaps we should consider the aspirational images around us.

It's true that mixed-heritage children like my daughter can often be seen promoting kids' clothing. And Beyoncé features regularly in TV commercials. But take away the cute kids and the celebrity plugs, and the incidence of run-of-the-mill aspirational images involving non-white people is low. Naomi Campbell herself brought attention to Victoria Beckham's 30-strong lineup for London Fashion Week, which included only one non-white model.

I decided to examine the recent autumn and winter clothing brochures around my home. High street brands Debenhams and Joules featured no adult models of colour, although the child models were a multiracial bunch. White Stuff, beloved by the middle-class mummy brigade, featured not a single model of colour. Neither did posh adult clothing company Toast. Or fitness-wear brand Sweaty Betty. Only Boden, which counts Samantha Cameron and Michelle Obama among its fans, included a broad spectrum of child and adult models. I emailed three of the companies to ask about the lack of colour.

White Stuff marketing director, John de Chane, couldn't show whether the ironically named company, which has more than 100 UK stores and outlets, had ever used a model of colour. However, he wrote, "we've identified our model selection criteria is a key issue for us to address, and … it's on our agenda to make a positive effort to be truly representative going forward." Yippee! In the year 2014, this 30-year-old brand may actually begin to use models who reflect the society we live in.

Jessica Seaton, director of Toast, replied that her 14-year-old company seeks out women or men "with intelligence and something special about them". She added that on "a couple of occasions" people of colour had been found who fitted this description. Is she really implying that black models simply aren't bright enough? I hope not. And she continued: "If we search for a mixed-race or coloured girl … the models are more overtly sexy, vampish and not at all right for the brand. It's difficult and somewhat depressing, but this is the situation we are faced with." I was stumped by the "sexy, vampish" observation. Are black models being forced into this stereotype (the kind that Lily Allen seemed to be unconsciously buying into in her video last year)? And if so, one can only assume this is because model agencies are only being asked for this kind of black woman, which leads to further questions about how widespread and deep-rooted racism is within the fashion industry.

An unnamed Sweaty Betty spokeswoman gave me a more forthright reply: "We have taken your feedback on board and will definitely try to have broader representation of ethnicities over the next few campaigns." The lack of bumbling was refreshing.

This week it was reported that a Nigerian entrepreneur is trying to counter children's stereotypes by launching a range of black dolls. And as my daughter matures she appears increasingly aware of the positive aspects of darker skin. But I'm not overjoyed about having my job as a parent frustrated. I think it's my turn to do some excluding. I'll be spending my money in future with forward-thinking companies only.

Email ThisBlogThis!Share to TwitterShare to FacebookShare to Pinterest
Labels: black and white, fashion

The power of symbol - Sankofa

Often people ask me 'what's that symbol?' referring to the logo of the Norfolk Black History Month. I often say that's Sankofa expecting everyone to know. Of course they have no idea what i am talking about so we quickly move to the next question which usually is 'what did you say?'
So what's Sankofa? 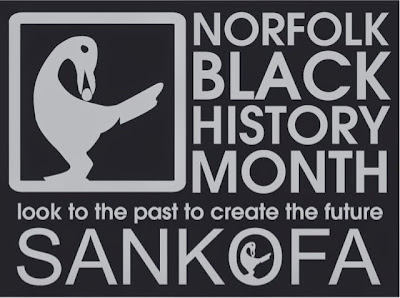 Sankofa is an Adinkra symbol used by the Akan People of Ghana (and by the Norfolk Black History Month logo). Adinkra symbols are graphic representations of popular maxims or philosophical concepts. Originally they were used to decorate textiles, but they can now also be found on pottery and woodcarvings and in contemporary architectural design.
The Sankofa symbol depicts a mythical bird which holds an egg symbolising the future in its beak. The bird moves forwards while looking backwards to the past. The symbol is expressed in the Akan language as Se wo were fi na wosan kofa a yenki.
Literally translated, this phrase means It is not taboo to go back and fetch what you forgot. However, modern translations usually render it as One must return to the past in order to move forward. In either case, the message of the symbol is that we must learn from the past in order to build a better future.
Celebrating traditions and visual art and image is part of the celebration of Black History and culture. African visual art is often characterised by by single forms that do not only refers to human or animal proportions of scale, but to its psychology both in language, expression, meaning and symbolism communicating complex messages in multiple dimensions responding to the faculty of sight, sound but also imagination, emotion and motivation and religious experience. The Sankofa symbol is a good example of this highly developed art expressed in emotional visual language containing multiple meaning and messages in a single symbol or Hierography.
Posted by Unknown at 19:44 No comments: